For the fourth year in a row, Texas A&M University was one of the sponsors of the TMBBQ Fest, and Texas Barbecue faculty and students were in attendance at the festival on Sunday, September 14, 2014 in Austin. The Texas A&M University team included Davey Griffin, Ray Riley, Jeff Savell, Blythe Schultz, Kaitlyn Porter, Hillary Henderson, Michael Berto, and John Chivvis.

Our booth has been dubbed the Barbecue Genius Counter, mimicking the Apple Genius Bar concept where people can get their questions answered. But we find our group is as much about learning about barbecue than it is about teaching! What was our most asked question by the participants at the festival? How do we get a ticket to come to Camp Brisket or Barbecue Summer Camp? These camps we conduct with Foodways Texas sell out now in a matter of minutes! A trip to Austin would not complete without seeing Aaron Franklin of Franklin Barbecue, Austin. The rumor was that the line to get a photo with Aaron was almost as long as the line to get his famous barbecue! Here is Aaron visiting with our group and slicing briskets for the crowd. No festival would be complete without having Kerry Bexley and Tootsie Tomanetz from Snow’s BBQ in Lexington in attendance. We had the chance to meet Israel Compos of Pody’s BBQ in Pecos. Israel had some great looking baby back ribs on his pit when we went by. Wayne Mueller of Louie Mueller BBQ in Taylor had a variety of products to sample, all of which were outstanding! Shane and Catherine Stiles of Stiles Switch BBQ in Austin had their usual great food, but most importantly, with them being Aggies, they just love visiting with us! Tim Rattray of The Granary ‘Cue and Brew is someone I have had the pleasure of meeting recently and dining at this restaurant in San Antonio. It was great seeing him and sampling some great food, especially the smoked pork belly with jicama. He is another Aggie who is making his mark on the Texas food and beverage scene. Here are some more photos of our friends, both old and new, with our faculty and students. Texas Barbecue is all about great food and great people. What a great opportunity for the Texas A&M University team to be involved with both of these. 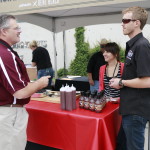 One Response to Aggies participate in TMBBQ FEST 2014