Pitmasters and owner/operators from some of the leading barbecue establishments throughout Texas participated in the sixth Texas Barbecue Town Hall Meeting, which was held at the AgriLife Center and the Rosenthal Meat Center on Monday, December 9, 2019. About 60 people were in attendance, and participants received updates on livestock and meat markets for beef, pork, chicken, and turkey by David Anderson, professor and extension economist, Department of Agricultural Economics, Texas A&M University, tips about effective marketing from Rachel Cutrer, Ranch House Designs, and a beef grading and beef cutting demonstration by Davey Griffin and Ray Riley. David Anderson gave a market update and shared with the participants what was going on in the beef, pork, turkey, and chicken markets. Anderson stated that the beef market remains strong, but the pork, turkey, and chicken markets are showing both high supplies and weaker demand. Factors such as African Swine Fever will continue to play a role on the worldwide supply of pork. Rachel Cutrer gave some interesting points about how to effectively market your barbecue business. She gave great examples using some of the barbecue establishments at the meeting about good use of logos and colors, websites and social media, and email lists. Thanks to John Brotherton, Brotherton’s Black Iron Barbecue and Daniel Vaughn for preparing fajitas and pork for lunch.We greatly appreciate everyone who helped prepare and serve the lunch for the town hall meeting. There was time before and after lunch for visiting with old friends and making new friendships. Thanks to Kelly again for taking some of these great photos. After lunch, the participants moved over to the Rosenthal Meat Center for a demonstration of beef carcass quality and yield grading and for a beef top sirloin cut-out demonstration. Davey Griffin and Ray Riley led this exercise and answered questions about both topics. 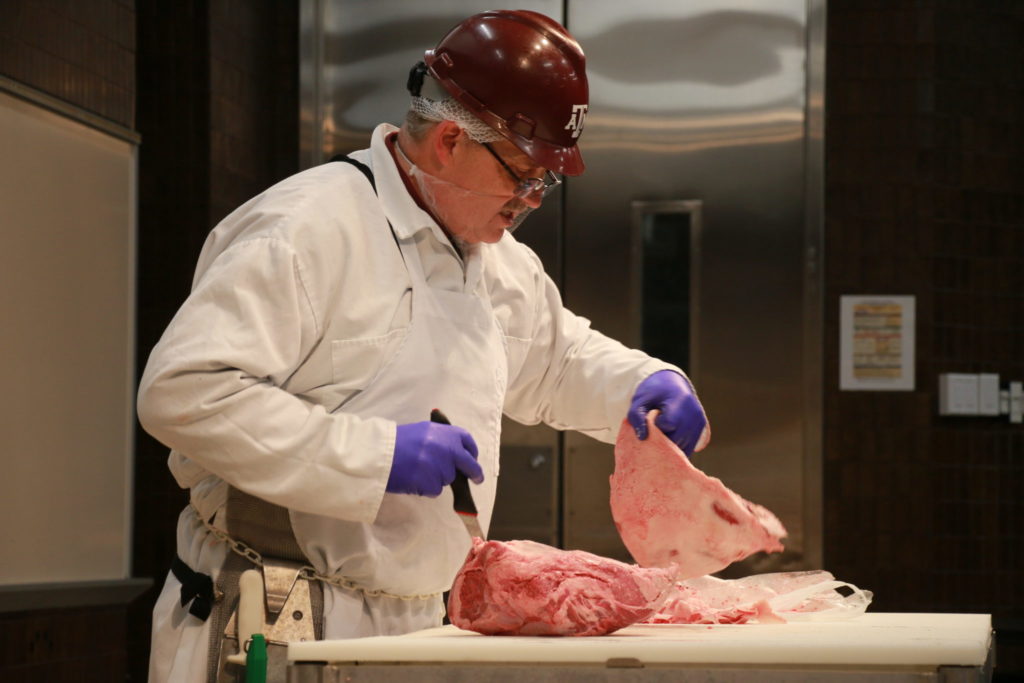 We thank everyone who came to the town hall meeting, and we look forward to working with the the great folks who prepare Texas Barbecue.