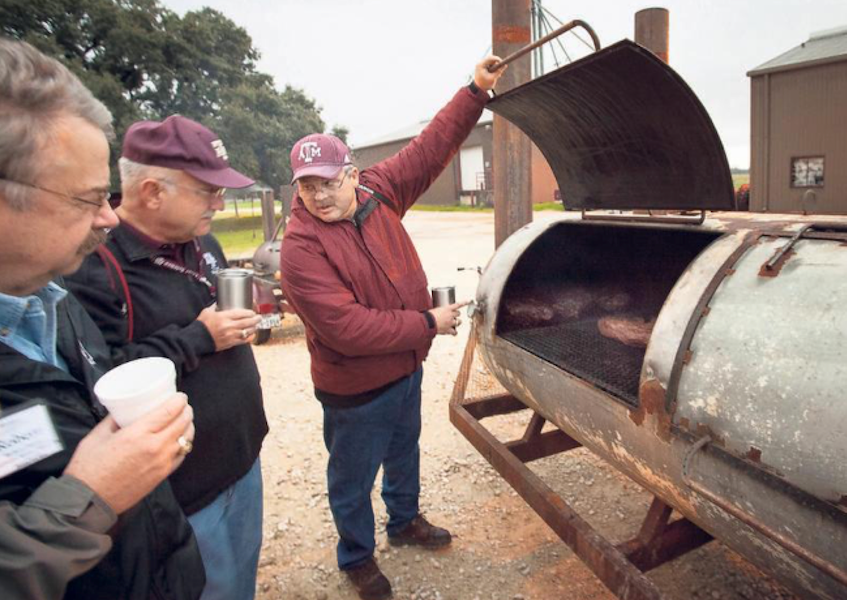 As Texas A&M professor Davey Griffin demonstrates, frequent monitoring of the smoker is part of the job. But don’t open the lid too much; that’s a no no. Michael Haskins/Special Contributor

Tell any barbecue enthusiast you’ve spent two days at Camp Brisket at Texas A&M University, and the reaction will be unanimous: Take me with you next time. If only it were so easy.The $495 class last month sold out online via Foodways Texas in 10 seconds. The yearly event has gotten so popular since it started in 2013 that folks from nearly every corner of the U.S. – Seattle, Atlanta, Los Angeles and Buffalo, N.Y., and many points in between – traveled to College Station to hear Texas’ most notable barbecue experts share secrets.

Camp Brisket won’t get any larger or more frequent, either. Classes in an aging Texas A&M room max out at about 60 people each year, ensuring the high-priced boot camp feels like an exclusive two days spent tasting and talking about Texas barbecue’s most famous cut: brisket.

“If we had chicken fried steak camp, no one would come,” jokes Jeff Savell, a professor who specializes in meat science at A&M.

Yes, brisket is the reason Central Texas barbecue has become a worldwide curiosity, with restaurants opening as far away as Melbourne, Australia, emulating the Lone Star State style.

Down in the pulpit were panelists Wayne Mueller, owner of Louie Mueller Barbecue in Taylor; Bryan Bracewell, owner of the 134-year-old Southside Market & Barbeque in Elgin; Russell Roegels, owner of the new Roegels Barbecue Co. in Houston; Daniel Vaughn, barbecue editor of Texas Monthly; a team of meat scientists at Texas A&M; and the biggest celebrity of them all, Aaron Franklin, owner of Franklin Barbecue in Austin and one of the world’s most revered brisket experts.

“Here comes barbecue Jesus,” someone whispered as Franklin walked in during the first session of Camp Brisket.

And the revival had begun.

Eager students at Camp Brisket were required to introduce themselves – to explain themselves, maybe – when the first class kicked off. One man said he was there “to justify the massive expenditures of barbecue equipment.”

He makes a good point: The steep $500 admission fee to Camp Brisket is nothing compared with the thousands of dollars that can be spent on a smoker, then on each $100 brisket, some of which might endure 15 hours of low, slow smoking only to turn out mediocre and land in the trash. (No telling how much Domino’s and Pizza Hut have made after failed barbecue attempts.)

Most had ambitions of opening a barbecue joint when they retire, or when the oil and gas industry finally tanks, or when their wives would let them quit their day jobs. Each shamelessly loved barbecue and desperately wanted pitmaster secrets.

“It’s pretty interesting to ponder why we do this to ourselves,” said Robb Walsh, a Texas food writer and speaker at Camp Brisket.

Smoking brisket is an art and a science that’s nearly impossible to perfect. It involves stoking a fire in a smoker located outdoors, then keeping the temperature consistent for more than half a day while the fatty piece of meat inside cooks slowly and develops a peppery bark and smoke flavor.

No wonder barbecue enthusiasts develop such a relationship with their smokers.

“You pray to it. You drink beer with it,” said Kevin Kolman of Weber. And you sit out there – for a long time.

Source: Opening the lid on Camp Brisket, one of Texas barbecue’s most exclusive events | GuideLive